First a bit of background.

A little over twenty years ago I started to restore a 1937 Panther Model 100 motorcycle.

The old girl was a runner when I got her and I’d had her on the road “as she was” for a couple of years, a bit of a “rat bike” i.e. rough but a good runner.

I rode her as a solo to the Isle of Man for the TT, put a ‘chair on her and rode her to the Netherlands, covered a fair old mileage in the UK and she endeared herself to me so that I decided she deserved to be “done up” to look a bit more like she had when new.

I got as far as the disassembly, repainted the frame and mudguards (fenders if you prefer it), and then, having got as far as filling the dents and priming the tank, I was made redundant at work.

This resulted in a total change of lifestyle as I became self-employed and started up a motorcycle training school, which meant of course that I lost any spare time to use on the project so it had to go on hold for the moment, which moment became 20 years!.

Having turned 65 I have now retired from running the school so I should now have the time and hopefully I will have the old girl back up and running sometime in the relatively near future.

To help push me towards this I have decided to start this blog as a spur to keep me going.

Situation at present is that the frame repaint is finished. I had the Webb girder fork rebuilt by Percy & Web back in about 1990 and that has been fitted, all that’s required there is to source and fit new friction discs for the fork and steering dampers.

The tank is in primer so will need finishing and then there’s the motor, gearbox and drive to see to, plus incidental tin-ware.

The motor is currently on the bench with the head and barrel off, I’ll need to find some new rings for the piston but the bottom end is sound.

Fortunately one of the jobs done before the hiatus was to have the rear sprocket retoothed by Roger Maughlin at Supersprox, I have the earlier Enfield hub with brake on one side and drive on the other, so that’s one problem out of the way!.

First job though is to prepare a work space! at the moment all is in the box room, but I can’t work there as it is upstairs and I don’t like the idea of riding the completed bike down them! 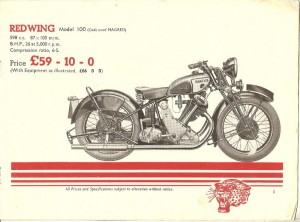 1 thought on “By Way Of An Introduction”