While I do not intend to split the crankcases of the engine they sadly need cleaning and to help with this I’m going to remove the timing case cover so I can clean it up separately and then paint the raised “Redwing” logo on it.

The cover is held on by three nuts which are on studs going through both crankcase halves and nine raised countersink head screws.

All of the screw heads have the slots damaged but with care and pressing the screwdriver blade hard into each slot as I unscrewed them I managed to get them all out.

To my surprise they are threaded 1/4inch BSW, I’d expected them to be either BSCy or BSF.

The old Whitworth thread is seldom found on vehicles as it is so coarse. The finer pitch BSF (British Standard Fine) thread is much more common, and on most older British made bikes the BSCy (British Standard Cycle, sometimes also called CEI or Cycle Engineers Institute) threads are often used.

However Whitworth is the strongest of the thread forms so I suppose its use in threads going into the aluminium alloy crankcase is not too surprising.

Fortunately all these thread-forms use the same range of spanners, and this brings up a frequent cause for confusion for newcomer owners of these elderly machines, they can see no relationship between the size marked on a spanner and the size of the nut that it fits,the fact that each spanner is marked as being for two different sizes adds to their problems.

A 3/4inch Whitworth spanner is of such a length that it is difficult to get enough pressure on the bolt to strip the thread. Since BSF is a finer thread than BSW it is easier to strip so a 3/4inch BSW spanner also fits a 7/8inch BSF nut and is the correct length for it.

On removing the timing cover some thick, black, oily gunge dribbled out so I’m going to get some paraffin and clean out the insides of the timing case before I re-assemble things.

When I had a look at the timing cover I found that while the old gasket was intact, there were traces of an older gasket still on the crankcase joint face, this is the main reason why old Brit bikes have a reputation for being oil-leakers, it’s not so much the bikes at fault as the owners
making basic mistakes such as this so that the joint faces to not pull together properly, a tiny gap is left and the hot oil finds its way out. 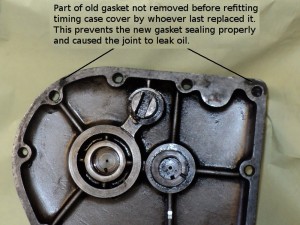 Anyway, I’ve put a set of case screws onto the list for the next lot of spares ordered.

Then it was just set to with hot soapy water and scouring pad to clean up the outside of the timing cover. 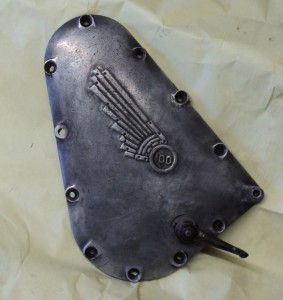 It appears to be cast from an alloy that has a relatively dark colour as while it has cleaned up quite well it does not have the bright silvery appearance of the casings on a more modern machine.