Last time I went to go out on the Pussy I found the battery was nearly flat.

Due to the risk of interfering little fingers switching the lights on in the garage I always disconnect the battery when I park her up, there’s a quick-connect there for this very purpose, so I realised something was wrong.

Once she was fired up I switched the lights on and revved her up, sure enough the ammeter showed a steady discharge and the lights did not brighten up, the dynamo wasn’t charging!.

So it was down to the garage today with meter and tools.

Main suspect was the dynamo itself, it being both elderly and a product of the Prince of Darkness.

First thing was to uncouple the drive, this meant removing the dynamo chaincase and then the dynamo itself, not difficult but fiddly, the electrical disconnect was easy, just take out the lock-screw and plate, pull out the  two “plug” connectors and I soon had the dynamo on the bench.

First to be checked were the brushes had they stuck in their holders?, were they contacting the commutator?, what was their insulation like?, how about their connections? All seemed well here.

I then realised that one end of the coil was MEANT to be connected to earth so I disconnected that end, tried again and got a maximum reading so the coil checked out.

Since the dynamo checked out electrically I next tried a quick and dirty check, if you connect a battery across a dynamo it will run as a motor, this is not an absolute check, since while if it doesn’t motor then it’s definitely  U/S  the fact it will motor is not a guarantee of it being OK, just an indication that it probably is .

To motor a LUCAS dynamo you need to connect the “D” and the  “F” terminals in the dynamo together  and connect them to the live side of your battery, connect the other side of the battery to the dynamo casing and it should spin over and mine did, so, taking the electrical checks along with the dynamo motoring the dynamo seemed OK.

Next to check was the regulator and to access this meant the saddle had to come off.

So it was unbolt the saddle springs, remove the front pivot bolt and lift it away, much easier to say than to do!

The regulator is bolted to the saddle support bracket so that was next and I had the regulator loose in my hand.

The fault was immediately apparent, a broken wire!.

The brown lead to the “A” terminal had broken just where the inner wire leaves the insulation, it was being held in place by the harness but was not making a connection.

The “A” lead is the one taking power from the regulator forward to the ammeter and hence the main switch and from there back to the battery so it’s not surprising the battery was flat.

The connection was soon remade and then everything had to go back together again.

As a point of information, the connections to the regulator are usually in the order “F”  “A”   “D”  “E”, that’s Field, on Panther that’s the green lead, “A” goes to the Ammeter and gets the brown lead, “D” goes to the Dynamo and is the yellow lead and the black Earth lead goes to “E”.

Some of the late pattern post-war regulators had them in the order “D”  “E” “A”  “F” but a quick look at the wire colours tells you, the only ones I’ve seen like this were the late pattern rubber mounted regulators with the crimped on aluminium casing.

I’ve now got some 300 miles up on the old girl and it’s time to make the initial running adjustments, a 300 mile service as it were, but I’ll leave the initial oil change till just before I put her away for the winter or 500 miles, whichever comes sooner.

Most of these are obvious ones, valve clearances, chain adjustments, cable free play and such, but one set are not, the front forks.

After the Second War there was an almost universal adoption of the hydraulicly damped telescopic fork for front suspension on bikes.

Previously there had been several options but probably the most common was the “parallel ruler” type or “girder fork”.

In the late 1930’s Panther did not make their own forks but bought them in from “Webb”, probably the best known of the proprietary manufacturers. For the Model 100 they used Webbs “HeavyWeight” fork, similar to that pictured below which shows the fork as intended for use on a Velocette motorcycle. This is taken from the “Webb” catalogue of the time, which I have lifted from the “Velobanjogent” website HERE 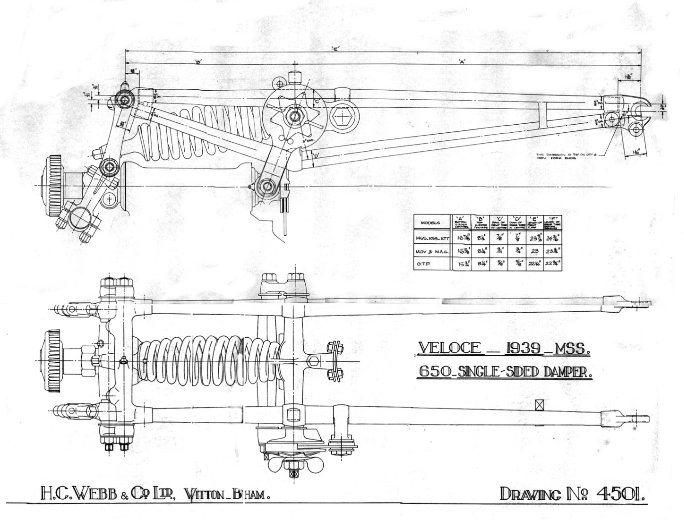 This pivots on four spindles, two running in the yokes and two in the fork girder, the spindles being joined by pairs of links, the illustration below shows the layout, here in a different fork model and again taken from the same catalogue. 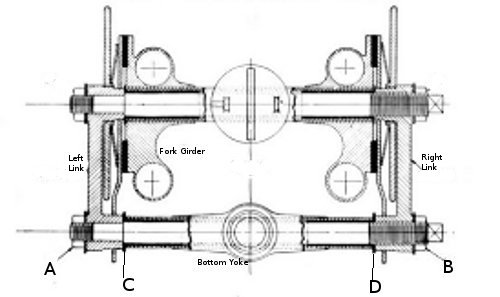 What needs to be adjusted is the freeplay of the spindles, if it is too tight the links are pulled tight against the yoke and the fork girder and the fork becomes locked up but if too slack then the girder can move side to side to the detriment of the handling.

To gauge the free play there are a pair of knurled washers at “C” and “D”. Adjustment is correct when one of these is held firm by the link but the other can be rotated, that means there is minimal free play in the joint.

When I rebuilt the old lady I had the forks refurbished by Percival and Webb down in Birmingham. However now they have a few miles on them things have settled in and they now need adjustment, a bit of excessive free play having appeared.

To make the adjustment one end of the spindle is squared to take a spanner, however I prefer to use a tap wrench here as I find it gives better control. 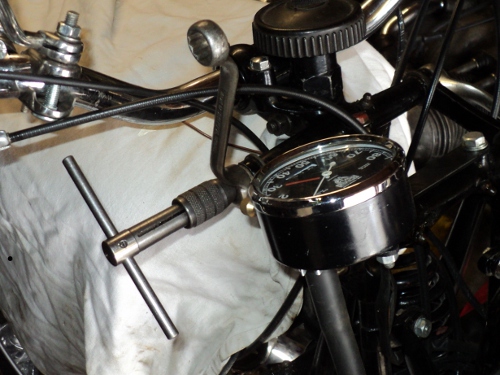 The adjustment technique is not quite as obvious as it seems, first you slack off both the locknuts “A” and “B” and make your adjustment of the spindle.

You the tighten locknut “B” followed by “A” and then you check the play, if it’s right all well and good, if not try again. It’s a bit fiddly but you soon get the feel for it.

If you try to set the play without retightening “B” each time, and then locking it up afterwards you’ll find things set too tight because when you pull up on “B” it moves the link a fraction inwards on the threads by enough to take out the freeplay you have just so carefully set! Experience speaking here!.

Once you have one spindle set then you move onto the next until you have all four set.

Since the spindles are working in plain bushes you need to keep them well lubricated, this means regular greasing with the inevitable result that there is excess grease appearing at the links that you need to clean up, don’t just leave it as there is a friction damper as part of the lower right link and you definitely do not want any grease to find its way in there!.

Back in the day a standard part of the manufacturers tool kit that was supplied with the bike was a small grease gun, about 6 inches long, intended for this very job.