The new pipes and silencers have just been delivered, it took a while after they were ordered last month only to find the pipes were on back-order.

I’d no sooner received them than I went to fit the new pipes.

These have a flanged end that is clamped against the end of the head stubs by a big ring-nut and there needs  to be a gasket between the pipe and the head to seal the joint.

The originals would have been a copper/asbestos crush-ring but these are no longer available, however there are useable substitutes around as a number of modern engines also use this system and their gaskets will fit.

The trick when fitting these is to get the pipes flange flat against the head stub and nip it up like that.

To do this you fit the pipe loose and on it own, before securing the lower end. If you try to fit it with the far end secured to the silencer then the flange is guaranteed to sit with one side against the  stub  and the other tilted over and not in contact with the stub. Once it is like this you will never manage to pull the flange into a decent gas-tight joint with the stub.

So it’s slip the ring nut over the pipe, put the gasket in place and offer the end of the pipe up to the exhaust stub on the head.

This is one of those jobs you really need two pairs of hands for, but a helper gets in the way!

You need to support the length of the pipe, align the end against the end of the stub while keeping the gasket in place and then persuade the nut to start on the threads of the stub while not to cross-threading it.

Then after I’d managed this and wound the joint up to hand tight I realised that I had the pipe on the wrong side of the footrest, so I had to take it off and start again, to mutterings of “Oh what a joyous thing to have done!” and like imprecations :).

Anyway I managed to get it back together again and then went and fitted its mate on the other side, for all that the Panther is a single cylinder machine it has a twin port head and so has a double exhaust system.

There was a fashion for these back in the 1930’s with most of the manufacturers having them in their line-up but Panther kept supplying them as standard to the end of production, the last of the line as it were.

Panther claimed that under heavy use, such as when pulling a sidecar, the twin-port head was less liable to warping than a single port, I don’t know the truth of this but I do know that back in the old days of the 50’s and 60’s it was not unknown for an impecunious owner to blank of one port and run on a single pipe and silencer.

Come to that you could order a new Panther from the works with a single-port head as an option.

Next job was to fit the silencers.

These have a loose “P” shaped clamp-on bracket to mount them onto the bike and I’d ordered up a new pair as well since I only had one old one and that was home made.

The clamps that came up were for “Universal Fitting” and so had to be atered to suit.

I had to fit the clamp onto the silencer, then mount the silencer onto the pipe and line up the clamp with the frame attachment point and mark the fixing point on the clamp.

Then it was take the clamp off, centre pop the mounting point and drill it to suit.

However the mounting “tongue” of the clamp was too long it also had to be cut back to suit and the ragged end from the saw-cut dressed of smooth and neat.

Last thing but one was  to refit the clamp onto the silencer and bolt it up to the frame. 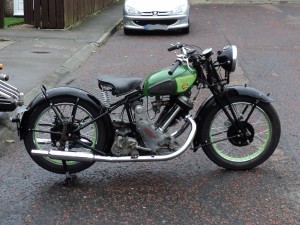 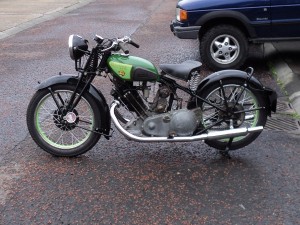 Last of all was that the manufacturer had put an adhesive sticker onto each pipe and silencer.

Because these were plastic, rather than have them melt and burn onto the pipes I had to remove them, and they would not just peel off.

I wound up heating them up with a hot-air gun until the pipe was uncomfortably hot to touch when they, reluctantly, peeled off leaving a layer of adhesive behind.

Then it was rub with a cloth dipped in WD40 to finally remove the adhesive layer, and even that took a bit of doing.

I wound up spending nearly as long cleaning off the stickers etc as in fitting the pipes!.