I now had the raw mouldings in hand but they were open backed.

To make the backs first the door apertures had to be trimmed to size and shape, a Dremmel tool with a cutting disk proved useful for this.

Next the rear sides of the boxes needed to be trimmed and sanded off level.To do this two sheets of 40 grit sandpaper were clamped onto a piece of MDF board and the boxes rubbed down on these.

Once I had the rear sides sanded down level and to the desired mark but before I moulded on the backs I needed a pair of doors for the boxes since it would be easier to sort out fitting the doors with the backs open.

The doors are a simple flat casting made on a flat board. They are reinforced with a plywood core.

If you remember, the door recesses in the end of the main mould were made by casting over two pieces of 3mm plywood cut to the shape of the door and fixed onto the end-plate of the mould.

These were taken off the end-plate and cleaned of the parting agent. They were then given a good sanding, about  1mm was then sanded off each side to reduce them in size a little and these became the cores for the doors.

A piece of MDF board was given several coats of wax and then a layer of glass cloth laid up on it and a core put in place on top of it. 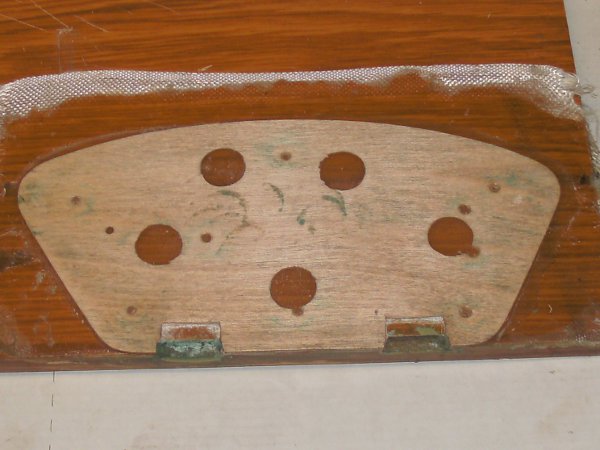 I had got some small cabinet hinges from the local DIY shop and to help secure these hinges to the doors each had one of their tongues enlarged by having a metal semi-circle soldered onto them.

The bottoms of the cores were shaped to accept the hinges, a pair were put in place and another layer of glass cloth laid up over them so there was now a sandwich of glass fibre/ plywood/ glass fibre.

Once the door mouldings had cured out they were trimmed to size and trial fitted in place so the toggle latches that secure them could be fitted, slots being cut to accomodate the hinge “tongues” at the bottom of the door apertures.
With the doors fitted I next had to make the backs.

The inside of the boxes were well cleaned down with acetone and they were then clamped down onto a flat working MDF surface that had been well waxed and then coated with a parting agent.

A bead of plasticene was put round the outside of the moulding/base plate joint to seal it.

The outside of the moulding wasnext covered over in case of accidental splashes of resin onto it and then, working through the door opening, a GRP back was laid up from inside each box.

The problem with these boxes however was that they looked what they are, a GRP moulding and the way round this was simply –  –  –  paint!.

So they were rubbed down and then painted so that they would match the finish on the rest of the bike and would look the part.

Once they were painted then the doors were finally fitted by sliding their hinge plates into the slots cut in the bottoms of the door apertures of the fibre-glass castings, being secured in place with that old faithful, Araldite. 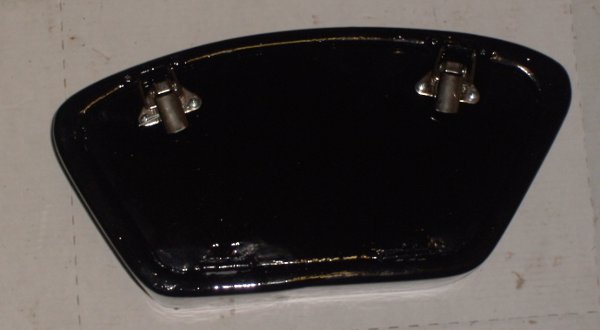 Rather than mount the boxes with clips to the mudguard stays I made up back-plates from 16 gauge steel sheet. These were fitted onto the stays and the boxes bolted onto these back-plates using spreader plates on the inside of the boxes.

Once the boxes were bolted in place the bike was put on its wheels and a little water was poured inside them to find the low point and a small drainage hole drilled there so that the boxes would not fill up with rain water when out in the “inclement conditions” which so often characterise our riding season.

Finally here’s a lookat how the new boxes appear when fitted to the old lady. 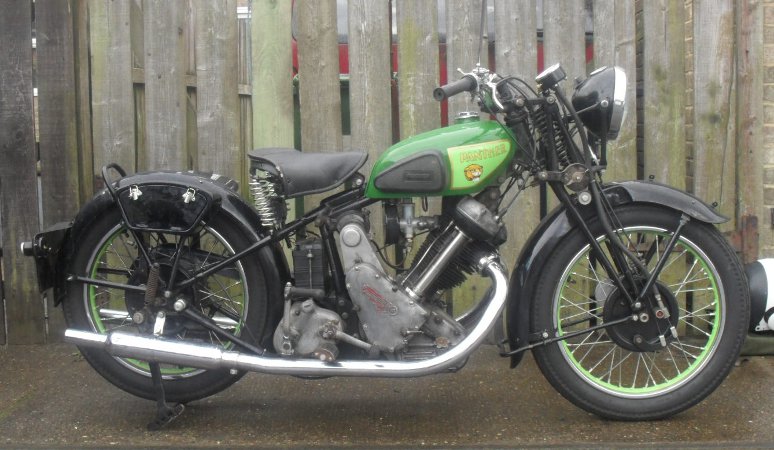 I got all my filler and glassfibre materials from East Coast Fibreglass Supplies in South Shields <http://www.ecfibreglasssupplies.co.uk>.

Their shop is near enough that I just went over there and dealt with them direct but they do mail-order as well and I found them very helpful with advice. The hinges were small cabinet hinges I got from the local DIY shop and the latches came from, of all places, Screwfix!.