The new rim for the front wheel has now arrived and I’ve picked it up from John at North-East Wheelbuilders.

As I’ve got to paint the centre of the rim before it’s built I’ve scrounged an old chrome rim from him as well so I’ve something to practice on.

Big problem is that paint will not “key” well onto chrome plate so I’ve to strip that part of the rim clean before I start.

I’ve had a rummage around on the ‘net and found an article in ”Wikipedia” saying that application of a “foaming oven cleaner” will do the trick so I’m going to mask off the rim side beads on the extra rim so as to leave only the central “spoke well” clear and give it a try.

As oven cleaner is pretty savage stuff I’m not going to rely on paper masking tape though but will try it with plastic electricians tape rather.

Instructions are to apply the cleaner, leave it for 10 minutes and then rub the plating off so I’ll just have to give it a try.

All I really need to do is to get the chrome layer off as even if it is a “three layer” plated rim (which I doubt these days) the etch primer will bite onto the nickel underlayer and if it has just been flashed straight onto steel then there will be no problem there.
_____________________________

Well, the oven cleaner was not the success I hoped for, it had no noticeable effect.

In case the removal was not noticeable, after all the chrome layer is only microns thick, I tried the old rim where the oven cleaner had been with some carborundum paper, the old faithful “Wet and Dry” and found no noticeable difference in “scratchability” between there and some untreated chrome.

So it’s been down to the hard way, rubbing out the rim centre by hand with 240 grit “Wet and Dry”, used dry and carefully cutting only as far as the edges of the rim flanges. A laborious, time-consuming but not difficult job, one that’s left me with cramped and blackened fingers though.

I’ve now masked off the flanges and just have to prime and paint the rim centre.

A rim centre is not the easiest of things to paint and I’ve come up with an idea how to do it.

What’s intended is that the rim will be slung so it lies horizontaly and this means that I can get the spray gun up into the centre of the rim and spray horizontally onto the rim centre.

By winding the rim round a few turns and then releasing it the rim will spin as the supension cords unwind and all I need to do is hold the gun steady and spray to get an even coating!

The answer is “Yes”.

I slung the rim from the roof on 4 cords to S-hooks in vent holes in the edge of the rim. While these holes were symetrically spaced they were not at 90 degrees to each other, as you can see in the picture, but they were far enough apart that the suspended rim was stable.

I wound the rim back a few turns and let it go, watching to make sure it spun level and once I was happy with it I wound it back up again, let it start spinning and began to spray with the etch primer.

Coverage was even but less than I expected so it took a couple of runs to get a satisfactory first coat. 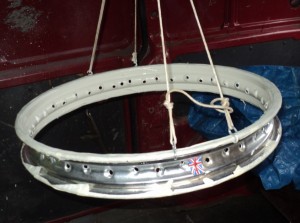 Rim as suspended for spraying

Two hours later it was given a second coat and then left overnight for the primer to cure.

Now it was an inspection job as to how well the primer had gone on and a couple of “touches” with the Wet and Dry to clear blemishes.

Once I was happy with the results I reslung the rim, spun it up and applied the first of the top coats.

An hour later that coat was dry so on went another, followed in due time by two layers of clearcoat lacquer.

The last lacquer coat was allowed to dry out a bit but before it had hardened the masking was stripped off the sides of the wheel, the idea being that as the last coat had not yet hardened the sharp edges left by the removal of the masking tape would “flow out” a bit and give a smoother edge to the central painted strip. 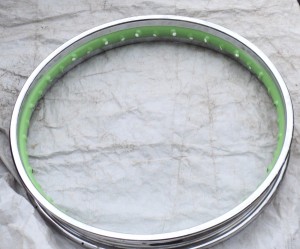 It still has to have coachlines run down the junction between the painted centre and the chromed flange either side but they’ll be easier to do once the wheel is built up.

Now it’s just left for me to take the rim to John and get the wheel built, apply the coachlines, shove a tyre onto the rim and that’s that, then I’ll have to get the back one done.

I’m getting some of the relatively minor jobs during the current wet/cold spell.

One of them is to make up a set of headlamp stays.

I did not have any as examples so had to set away from scratch and decided to make them up from tube, so I got a metre length of 1/2 inch tubing. The tube I got was really a bit on the heavy side for the job but as the price was right I decided to just use it anyway.

Unlike those on many bikes, the heavyweight Webbs on my model Panther have their headlamp stay lugs at right angle to the direction of travel.

This means that there is really only one position that the stay can be in and so I reckoned that if I made up the fork mounted end of each stay and bolted them in place, the cross-over point of the top and bottom stays could easily be marked and the other ends made up to suit.

I cut the tubing into appropriate lengths and went to flatten the end of the first stay in the vice and promptly found that the job was not as easy as I thought it would be!, I was worried that the vice would break the pressure it took!.

So it was put the stays in my pocket, get the modern bike out and go see Bob the engineer.

Bob introduced me to his 10 ton hydraulic press which quickly made light work of forming the stay ends.

Then it was back to the workshop where I drilled the mounting holes in the flattened ends and fitted the stays in place on the forks. 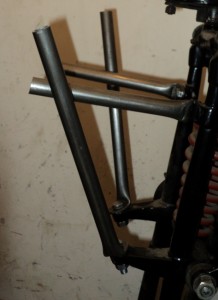 As you can see, the stays crossed at what appeared from the catalogue pictures to be the correct point, so it was then just a case of mark them out and it was back to Bob’s press to finish them off.

The newly flattened ends were now cut to length, drilled and shaped and a trial mounting of the headlamp was made. 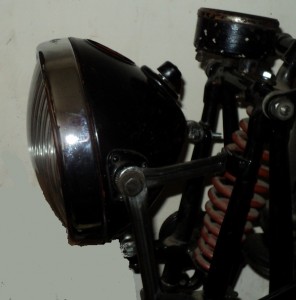 It took a little “tweaking” of the stay end angles but eventually all fitted together nicely so then the newly completed stays were put with the knee-grip plates to await being painted, might as well do everything at one paint session, it’ll mean less cleaning up afterwards.