While doing the clutch recork I noticed that the bottom plain plate of the clutch was sitting a bit too deep into the clutch’s outer‭ “‬basket‭”‬,‭ ‬so that the‭  ‬innermost insert plate was having its tongues bottom-out in the basket cut-aways.

This meant that the bottom insert plate was only gripping on one side, also because there was no “sandwich effect” with the insert plate between a pair of plain plates, the grip on the upper side of that plate was impared. This means that the clutch had lost‭ between ‬1/6 and 1/3 of its gripping area. 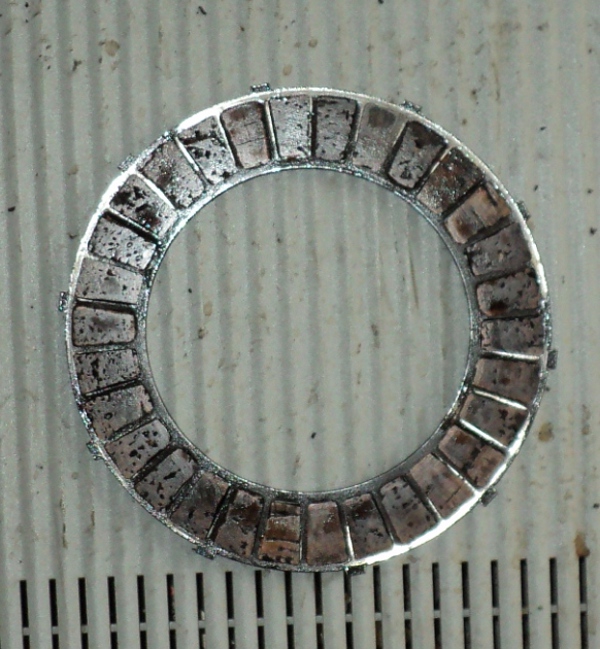 This is the bottom insert plate. This picture is of the upper side and you can see that the inserts have been pressed flush with the plate. There are also scuff marks where the metal of the plate has been rubbing against the next, plain, plate.

It also said that the inner drum needed a thicker distance-piece between it and the clutch‭ be‬aring cheekpiece.

To sort this out I put a steel-rule through the cut-aways‭ ‬in the basket and across the bottom plate,‭ ‬then measured how far that plate was clear of the bottom of the rule.

The inner drum was then removed and the thickness of the existing spacer measured,‭ ‬this dimension was added‭  ‬to the plate clearance and gave the size of spacer required.

All that then needed to be done was chuck up a bit of round bar in the lathe and turn up and part-off a new distance piece of the correct size.

Once this had been fitted,‭ ‬the position of the bottom plate was again checked,‭ ‬and,‭ ‬once I was satisfied then the clutch centre nut was tightened down and locked in place.

However this changed the distance between the clutch operating lever on the gearbox and the clutch backplate enough to take it beyond the available so a new clutch push-rod needed to be made up, longer than the previous by the additional thickness of the spacer.

Now that the clutch has been re-corked I have to expect that the plates will settle in a bit initially,‭ ‬so I’ll have to look to a clutch re-adjustment‭  ‬after a few miles of bedding in and hopefully that will be the clutch set up for the near future‭!‬.