It’s been quite a while since I’ve added anything to this blog, main reasons have been idleness on my part and having been out riding around on the Panther and her stablemates.

I’ve now begun another stage of the project and am prompted to make report.

It’s always been my intention to put a sidecar onto the Panther since doing so will allow me to take my dogs with me on the events that I take her on, as it is, when I go to an event  I have to either use the more modern BMW outfit or leave them behind which is not always convenient.

The sidecar I intend to fit is this Steib 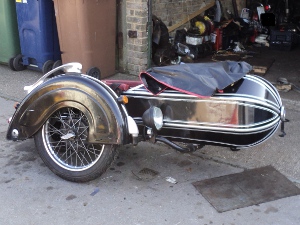 As you can see it’s in nice condition

but when I offered it up to the Panther it was immediately obvious that they were not compatible.

Problem was that the Steib was on a chassis dedicated for use with a BMW, the major fittings were in fixed position with no adjustment possible and not only that but they presumed the presence of a front down-tube on the frame.

A problem here straight away because the Panther does not have such a tube!, it uses the engine as a stress bearing member in its place.

So a change of plans, if the Steib chassis wouldn’t fit then I needed one that would fit, but that would also take the sidecar body.

I began a hunt for a suitable chassis and determined on a Watsonian VG21, a chassis of the same period as the Panther that would also take the Steib body.

Last time I wanted a chassis, everywhere I went I was tripping over VG21’s, but now I wanted one they had become like hens teeth!

I eventually tracked one down and work began.

First thing to do was to convert it to fit on the right hand side of the bike.

Reason for this is that both my other outfits (both BMW) have right-hand sidecars so having another one with a left-hand sidecar is asking for problems.

After removing this steel bush, and it did not want to be removed!!, I next had to source a replacement Silentbloc but I had a bit of luck here because I found someone who had the correct bush in stock.

So, conversion done and wheel fitted (I’ve not even looked at sorting out the sidecar brake yet!) it was time for the first attempt at offering up the chassis to the bike

At the moment I only have the rear main fitting sorted out so with this loosely fixed onto the sidecar it was connected to the bike and some wood blocks strategically placed.

A bit of shuffling it round and use of a tape measure and there it was in approximate position against the bike. 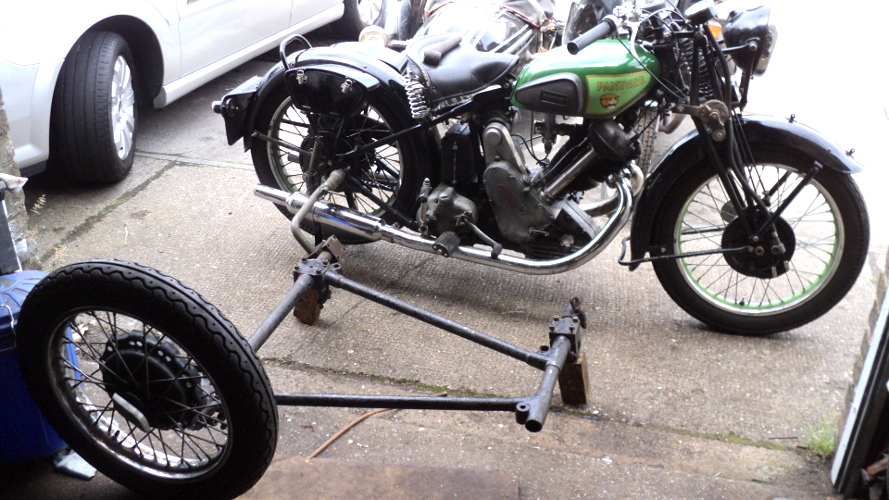 I was now able to get some other measurements I needed then it was all again dis-assembled.

Main purpose was to check the feasibility of a right hand chair on the old lady, I was fairly sure it would be ok as there is a proper rear mount point for a sidecar at the offside rear , and to get the dimensions for having a swan-neck made up for the job.

This will be a simple piece of pipe-bending, a length of 1¼ inch OD heavy-wall steel tube with a 90 degree bend in the middle, simple to make if you have the facilities, but I don’t so it has to be farmed out.