One thing that’s missing is the mounting-plates for the knee-grips on the tank.

When I got this bike there was only one knee-grip fitted and this was the wrong type, it was the later type that mounts through holes in the grip itself and it was looking rather sad for itself as well.

Back when I first got this bike the P&M spares shop was still open on a Wednesday and as I was in the vicinity of Cleckheaton one Wednesday I went in.

Talk about going back in time, anything with a price tag on it was still marked up in £.s.d., none of this new-fangled decimal currency!, parts for pre-war models lying next to Model 120 stuff, a cylinder head priced at £6:5:0, (For those who can’t remember that’s £6:25), wish I could get back there now!.

Anyway I came away with a set of new knee-grips, some valve guides, a set of the top engine mount spacer-bushes and some transfers and I don’t remember being it over a fiver, I don’t think the prices had changed since the Fifties!.

They had the transfers in a box, there were tank transfers going back to the First War “RAF” models and I was told to take what I wanted, I only took the ones for my bike but could have taken a bigger selection and wish I had now, they’d be ideal for samples for the transfer scheme.

Typically, even though I needed the mounting-plates for the knee-grips I forgot to ask if they had any, and they’re hardly an over the counter spare in the bike shops today!.

So, I got a drawing of the plate through the Panther Owners Club, went down to Metals Supermarket, got some sheet steel and set to. 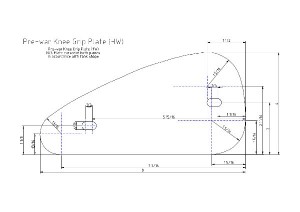 This is what I needed (Drawing courtesyof P.O.C.)
I got two pieces of 16 gauge steel, each 4 inches by 8 inches and I marked one plate out from the drawing. These plates bolt onto the tank so there are two 5/16 inch slots in them for this purpose.

I drilled a 6mm hole at one end of each slot and then used these to bolt the two plate together. 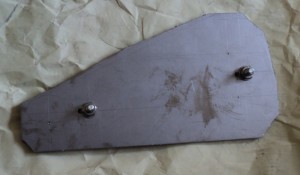 This is the result of attacking the plates with a Hacksaw
Using a hacksaw I then roughed out the two plates to an approximation of the correct shape and then it was down to use of a file to shape them down to the marked outline. 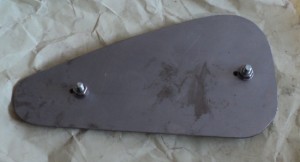 3/4 of an hour with files gave this result
As the mounting slots are 9/16 inch long the next thing was to drill the holes for the other ends of the slots, I’d already drilled a pilot hole for these when I drilled the 6mm holes.

This left a thin web between the holes so it was just cut this web, finish off the slots with a file and it was job done all bar the painting! 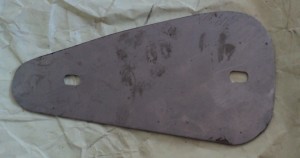 I’ve tried the plates in the knee-grips and they fit as they should, I can see it being a fiddle to fit them once the plates are bolted to the tank.

Trying them on the tank shows that they will need to be bent into a curve to match the shape of the tank, so that’s going to be a job with a sand bag and a rubber hammer.